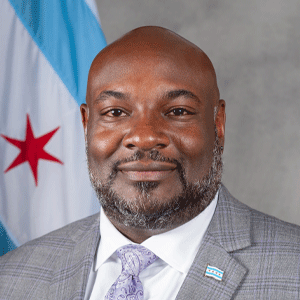 At the Department of Water Management, Commissioner Conner oversees the system that delivers high-quality drinking water to more than 40% of Illinois’ residents daily. This system includes over 4,300 miles of water main, 4,450 miles of sewer mains and two of the world’s largest water treatment facilities and over 2,100 employees. He manages an operating budget of approximately one billion dollars and a capital budget of approximately 750 million dollars annually.

Commissioner Conner has created a Division of Performance Management charged with documenting procedures, identifying training needs and establishing measures of success to bring heightened efficiency and accountability to the department. He has mandated EEO training for all employees- including senior management- and made it a condition of ongoing employment. He oversees implementation of Mayor Emanuel’s ambitious 10-year Building a New Chicago capital plan which represents a six billion dollar investment in water infrastructure to support the city’s future growth.

Commissioner Conner is an ordained deacon and has logged thousands of service hours with many community and civic service organizations including Prince Hall Masonic Grand Lodge, Grand Chapter of the Order of the Eastern Star, Prince Hall Affiliation and Phi Beta Sigma Fraternity Incorporated. He is the recipient of the Man of Honor Award from the Chicago Defender and he sits on the board of directors the Water Environment & Reuse Foundation.

Commissioner Conner attended Purdue University, where he studied Engineering and Construction Principles, and is certified in Emergency Action Planning by the Federal Emergency Management Agency. A lifelong Chicago resident, he resides in the West Pullman neighborhood and is the father of one daughter.