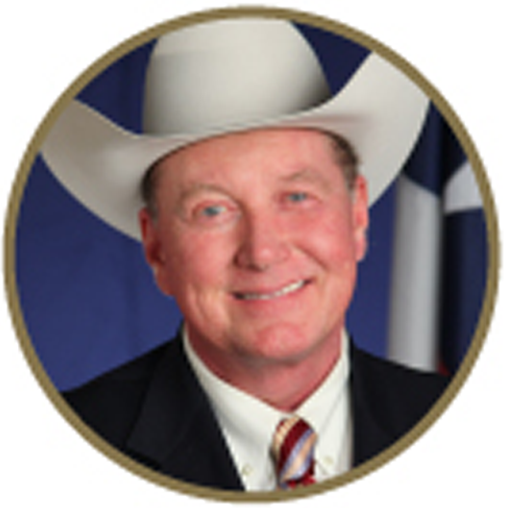 Walter “Walt” Roberts was appointed in January 2015 to serve as the Assistant Commissioner of Agriculture for Legislative Affairs and External Relations. In his role, Roberts oversees government relations, marketing and communications.

Prior to working at TDA, Roberts was the V.P. of External Relations at Lutheran Social Services of the South (LSS). The faith-based non-profit organization is based in Austin and serves Texas, Louisiana and Mississippi. LSS is a 132-year-old organization committed to serving people in need.

Roberts has been called a Renaissance Cowboy. He was born into a ranching family, he roped steers and rodeoed his way through high school and college. He attended the University of Central Oklahoma, earning a Bachelor of Arts and Master of Arts, both in Criminal Justice.

At the age of 24, Roberts became the youngest person to be elected to the Oklahoma House of Representatives. During his three terms, he worked on issues addressing agriculture, criminal justice and children in poverty.

Roberts is also an accomplished auctioneer. He attended the old Missouri Auction School, called the “Harvard of Auction Schools” by Newsweek magazine. Walt started an auction business specializing in estate and farm sales. His auctioneering skills are so good that for several years the school invited him back to provide instruction for classes. He still performs high-end charity auctions in Texas and across the nation.

Music is also a passion of Roberts. He is a champion fiddle player. He has played with a number of Western Swing bands including the Texas Playboys and Asleep at the Wheel. One of his most memorable concerts was at Kennedy Center in Washington D.C., where President George W. and First Lady Laura Bush enjoyed the performance.

Roberts is also an accomplished actor, appearing in movies, television and on stage. One his most famous roles was a principal supporting performance in the movie “Parkland.” The award winning ensemble included Billy Bob Thornton, Paul Giamatti and Marcia Gay Harden. The film’s executive producer was Tom Hanks.

While Roberts has been blessed to rub shoulders with the bright stars of Hollywood, he prefers the prairie life and working hard to grow the Texas agriculture industry.